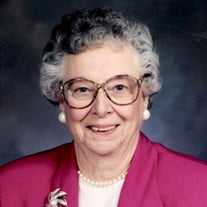 Evelyn Marcella, daughter of Opal Mae (White) and William Carl Stout was born July 9, 1923 at Woodward, Oklahoma. She passed away at the Alva Share Medical Center on the 4th of November at the age of 87 years, 3 months, and 12 days. The family lived in the Haskew Community south of Freedom. She attended Sunny Slope rural Grade School then the Freedom School. The family moved to Tangier in 1938 and she graduated with the class of 1941. She attended Northwestern State College from 1941 to 1943 and started teaching at Selman in 1943. While teaching at Selman she met and married George Chase on Christmas day of 1943 at her parents’ house in Tangier. To their marriage two children, Carol Lynn and Larry were born. Evelyn was a substitute teacher in Selman and Buffalo. She taught Sunday School for 3rd, 4th and 5th grades at the Selman Christian Church and was the Sunday School Secretary and Treasurer for many years. She was also the President of the WCTU, secretary and treasurer of the P.T.A. at Selman. Besides farming they operated the Huffman (Chase) Grocery Store from 1955 to 1957. Evelyn also cooked for the Selman school from 1954 to 1956. In 1957 the family moved to Alva and Evelyn worked at Ideal and Safeway Grocery Stores and finished college at Northwestern State with a minor in Home Economics and Social Studies in 1967 along with Carol and Kay. She taught 2nd grade at Burlington, Oklahoma for 18 years retiring in 1985. Evelyn was a member of the Alva First Christian Church. She enjoyed reading, crocheting, making quilts and traveling. They spent the winters in Texas from 1985 through 2007. She was preceded in death by an infant brother, her parents, a brother in law and four sisters in law. Evelyn is survived by her husband George, of the home; a daughter and her husband, Carol Lynn and Robert Rogers, of Stillwater; a son Larry of Alva; and a daughter of choice, Kay (Thomason) Schenk of Wellington, KS; six grandchildren and their spouses Jeremy and Shelley Allison, of Stillwater; Christopher and Mary Jane Allison, of Oklahoma City; Shelly and Robert Burton, of Enid and Christopher Lynn and Sheree Tisdale, of St. Martinsville, Louisiana and Hilary (Rogers) Gould and Robert of Oceanside, CA and Nathan Rogers of Trinidad, CO; eleven great grandchildren; Cody, Zachery, Calysta, Brittany, Logan, Jasmine, Rowan, Chrislynn, Alexus, Nicholas, and Mackenzie; and two great-great grandchildren, Emily and Haley; four brothers, Bill, Marvin, Charles and Herbert and his wife Marian; three sister in laws, 17 nieces and nephews, and other relatives and friends. PDF Printable Version

Evelyn Marcella, daughter of Opal Mae (White) and William Carl Stout was born July 9, 1923 at Woodward, Oklahoma. She passed away at the Alva Share Medical Center on the 4th of November at the age of 87 years, 3 months, and 12 days. The family... View Obituary & Service Information

The family of Evelyn Marcella Chase created this Life Tributes page to make it easy to share your memories.

Send flowers to the Chase family.