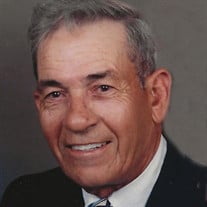 E. Jackie (Jack) Littrell was born January 5, 1933 in Aline, Oklahoma, the son of Elbert & Edith (Shaddy) Littrell. He graduated from Aline High School in 1951 and Wichita State in 1961. He served in the United States Marine Corp from 1953 - 1956. On December 26, 1957 Jack was united in marriage to Josephine Elizabeth Linch in Monticello, Georgia. He was a teacher in Kansas from 1961-1969, then moved to Williamsburg where he was an industrial arts teacher, a coach and taught driver’s education, retiring from Williamsburg High School in 1994. After retirement he worked for the Iowa DOT for many years. Jack was a member of St. Paul United Methodist Church in Williamsburg. He enjoyed gardening, traveling and spending time with his family. Jack died on Monday, April 19, 2021 at Mercy Hospital in Iowa City at the age of 88 years. He is survived by his wife, Jo of Williamsburg; two sons, Martin Littrell of Cedar Rapids and Scott (Kay) Littrell of Thornburg; two daughters, Phyllis (Kevin) Lund of Marengo and Debra Doty of Amana; thirteen grandchildren; 20 great grandchildren; three brothers Dolphie “Fay” (Lynne) Littrell of Wichita, KS, Donald “Ray” (Ramona) Littrell of Custer, WA, and Bill (Rene) Littrell of Cleo Spring, OK; three sisters Alberta Littrell , Barbara Kletke both of Alva, OK and Peggy (Larry) Van Meter of Dacoma, OK. He was preceded by his parents; two brothers Pete and George Littrell; two sisters Wanda Goins and Norma Hufford; and a brother-in-law Eddie Kletke. Celebration Of Life Service will be held 1:00 pm on Saturday, April 24, 2021 at Powell Funeral Home in Williamsburg. Pastor John Christianson will officiate. Visitation will be on Friday, from 4:00 - 7:00 pm at the Powell Funeral Home in Williamsburg. Burial will be held on Thursday, April 29 at Carmen Cemetery in Carmen, Oklahoma. Memorials may be given to the Williamsburg Athletic Association. Messages and tributes may be left at www.powellfuneralhomes.com

E. Jackie (Jack) Littrell was born January 5, 1933 in Aline, Oklahoma, the son of Elbert & Edith (Shaddy) Littrell. He graduated from Aline High School in 1951 and Wichita State in 1961. He served in the United States Marine Corp from 1953 -... View Obituary & Service Information

The family of Erwin Jackie Littrell created this Life Tributes page to make it easy to share your memories.

Send flowers to the Littrell family.