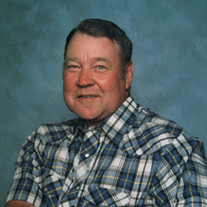 Ernest Henry, son of Ella Helen (Kletke) and Ludwig (Louis) Engelken, was born on February 16, 1940 at the Alva General Hospital. He passed away at his home on the 11th day of December at the age of 69 years, 9 months and 26 days. He attended the Zion Lutheran Grade School and the Lambert School where he graduated with the class of 1958. He attended Northwestern State College for two years where he studied architectural drawing. He served in the Oklahoma 45th National Guard Division for six years and took his basic training in Fort Leonard Wood, Missouri and Fort Gordon, Georgia. On January 25th, 1970 he was married to Marcy McNett in Cherokee. To their marriage a daughter, Leisa Renae, was born. Following their marriage he farmed the family farm and did custom harvesting for 27 years. For a while he also worked for Baker Mfg. of Alva. He loved to fly and received his pilot’s license from the late Leo Strickland. Mr. Engelken was baptized and confirmed by Reverend Otto Hoyer of the Alva Zion Lutheran Church. He was a member of the Northwest Pilots Association, and the Alva Elks Lodge. One of Ernest greatest loves was model trains. Visitors to their home were awed by his model train set-up and the great attention to detail paid to the scenery and track layout. He also loved wood working and drawing house plans, designing several homes and buildings in the Alva area. Mr. Engelken was preceded in death by his parents Louis and Ella and his parents-in-law, Chester (Chet) and Betty McNett. Ernest is survived by his wife Marcy of the home; a daughter and her husband, Leisa Renae and Scott TeLinde of Alva; three grandchildren, Destiny Marie, Jasmine Beth and Chance Alexander; three brothers and their wives, Ralph and Pat of Wichita, Kansas, Robert and Ruth of Chico, California and Walter and Jane of Houston, Texas. He is also survived by a number of cousins, nieces, nephews and a host of friends. PDF Printable Version

Ernest Henry, son of Ella Helen (Kletke) and Ludwig (Louis) Engelken, was born on February 16, 1940 at the Alva General Hospital. He passed away at his home on the 11th day of December at the age of 69 years, 9 months and 26 days. He attended... View Obituary & Service Information

The family of Ernest Engelken created this Life Tributes page to make it easy to share your memories.

Send flowers to the Engelken family.