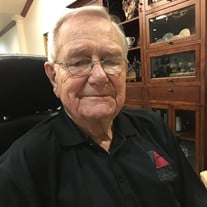 Ernest Arther (Artie) son of Kathryn Inez (Steele) and Nicholas Daniel Ware was born in Fargo, Oklahoma on October 31, 1919, he passed away on November 8, 2016 at the age of 97 years and 8 days. He he graduated from Fargo Oklahoma and attended Oklahoma A&M College playing basketball for Henry Iba. On August 3, 1941 in Alva, Oklahoma he was married to Velma Ruth Bloyd. In that same year he was drafted for World War II serving in the European theater. After his discharge, Velma Ruth and he came to Alva to open Ware Motors where he sold, Studebaker, AMC and Yamaha motor cycles and to raise their three children, Phil, Susan and Scott. After selling the business he went to work as a loan officer for Central National Bank and worked for Washburn Motor Company. A member of the First United Methodist Church, past president of Rotary. He loved to play golf, bridge and card games of any type. He was preceded in death by his parents, his wife of 69 Years, Velma Ruth on June 14, 2011, 2 sisters Norma Pittman and Betty McNeil and a brother N.D. Ware Jr. Artie is survived by his children; , Rev. Phil and Myrna Ware of Broken Arrow, Oklahoma, Susan and Adair Brown, of Denver, Colorado and Rev. Scott and Joy Ware of Woodward, Oklahoma. Eight grandchildren and their spouses: Debbie Ware, Patrick and Paulette Ware, Christy Stotts, Roger and Janice Brown, Randy Brown, Julie and Mike Haslar, Eric and Rev. Elizabeth Ware and Amy and Kyle Eckhardt, seventeen great grandchildren and three great great grandchildren and a sister-in-law, Paula Bloyd of Alva. A number of nieces, nephews other relatives and friends. In lieu of flowers, contributions may be made in his memory to the Oklahoma United Methodist Circle of Care, through the Alva First United Methodist Church.

Ernest Arther (Artie) son of Kathryn Inez (Steele) and Nicholas Daniel Ware was born in Fargo, Oklahoma on October 31, 1919, he passed away on November 8, 2016 at the age of 97 years and 8 days. He he graduated from Fargo Oklahoma and attended... View Obituary & Service Information

The family of Ernest (Artie) Arther Ware created this Life Tributes page to make it easy to share your memories.

Send flowers to the Ware family.