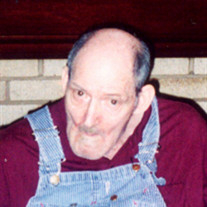 Elvin Merle, son of Marie (Johnson) and Clifford Holt was born on September 21, 1927 in Alva, Oklahoma. He passed away on the 14th day of February at the age of 83 years, 4 months and 24 days. Elvin was raised by his grandparents, Andrew and Leah Holt. After the deaths of his grandparents, Elvin went to live with his Aunt and Uncle, Harry and Velma Rhodes. Elvin lived there many years until Velma went to live at Beadles Nursing Home. Elvin followed on October 18, 1998. He enjoyed going fishing with his aunts, Leola Rhodes and Velma Rhodes. While at home, Elvin was the neighborhood watch person. He knew everything that went on in the area, those that were supposed to be there and those that weren’t suppose to be there. The young kids growing up in the neighborhood couldn’t get away with anything mischievous because Elvin would catch them. Elvin enjoyed sitting on the back porch watching the birds and squirrels. He did small jobs for his Aunt Velma, Aunt Leola, and cousin Gloria. Everyone that came to visit never got to leave without making a small monetary donation to him. After entering the nursing home, Elvin was introduced to a completely different lifestyle. He got to go to Wal-Mart and other downtown stores that he had never been to before. He even got to go to the wellness center. Elvin enjoyed playing bingo, and participating in other activities at the nursing home. Elvin was a collector of many things, cups, clocks, radios, telephones, cameras, and especially liked pictures. If you took his picture, he wanted your camera. He was a member of the Barnes St. Church of Christ. Elvin was preceded in death by his parents, his grandparents, a brother, Robert Holt, a baby sister and a half brother, Darrell Holt. He is survived by his half sisters: Madeline (Jim) Cline, and Ramona Shelite, his half brothers: Allen (Cindy) Holt and Stanley (Kathy) Holt. Also surviving are his Aunts, Hazel Spencer, Freda Rhodes, and Verda Murrow; several nieces, nephews and cousins and their spouses who were very close to him. Elvin will be missed by everyone who knew and loved him. PDF Printable Version

Elvin Merle, son of Marie (Johnson) and Clifford Holt was born on September 21, 1927 in Alva, Oklahoma. He passed away on the 14th day of February at the age of 83 years, 4 months and 24 days. Elvin was raised by his grandparents, Andrew... View Obituary & Service Information

The family of Elvin Merle Holt created this Life Tributes page to make it easy to share your memories.

Send flowers to the Holt family.