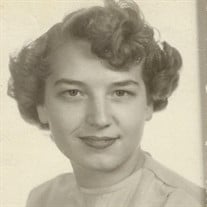 Elsie Janice, daughter of Arzilla (Katherman) and George Wray was born in Kansas City, MO on July 18, 1934. She passed on May 14, 2020 at the age of 85 years, 9 months, and 26 days. Graduating with the class of 1951 from East High School in Kansas City, Missouri. Miss. Wray was married to Donald Lee Barr in 1951 and to this union 5 children were born, Julia, Janice, Jeff, Joyce and Jill. She received her Bachelor of Science in 1968, she began teaching At Northwestern Oklahoma State University in the business department as a accountant teacher. In the summer she went to Stillwater to work on her Masters degree which she received. She was also recognized As an Oklahoma Outstanding Accountant Educator and awarded, A Fellow at NWOSU. In 1985 she took the CPA test which she passed the first time and began preparing personal taxes in 1987. She retired from teaching in 1995. Elsie was married to Ira James Rodgers in Alva Oklahoma in 1980 She was preceded in death by her parents, a brother George (Bus) Wray, her husband, Jim Rodgers and granddaughters Michelle Mathis and Connie Hofer. She is survived by 4 daughters and their husbands, Julia and Johnny Bartlett, Janice and David Mathis, Joyce and Darren Stebens and Jill and Robert Glasse, a son and his wife, Jeff and Janette Barr and a stepdaughter, Carolyn Hofer, 18 grandchildren, 25 great-grandchildren and 12 great great grandchildren. A number of nieces and nephews and other relatives and friends In lieu of flowers contributions may be made in her memory to Town & Country Christian Church, Woman of the Moose #1643 and in NWOSU Foundation, Business Department Through Wharton Funeral Chapel

The family of Elsie J Rodgers created this Life Tributes page to make it easy to share your memories.

Send flowers to the Rodgers family.