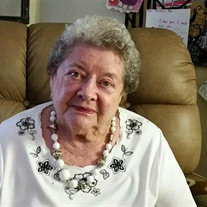 Elizabeth Ann daughter of Alice (Hayes) and Cleo Bowles was born April 16, 1925 in Cherokee, Oklahoma. She passed away on July 25 in Enid, Oklahoma, at the age of 91 years, 3 months and 9 days. Ann attended Lambert High School and graduated with the class of 1943. Elizabeth was united in marriage to Paul Gordon Murrow on May 30, 1943, at the First Christian Church in Cherokee. To this union three children were born: Paulette, Pamela and Charles. She was a homemaker and very active in her community. She helped organize the Alfalfa County Democratic Women, attended Democratic National Convention in Atlanta, Georgia, in 1988, was Six District Democratic Party secretary for four years, Six District Democratic Party President for four years, and served in the executive committee of both State Democrats and Democratic Women, a member of the Promise Group and C.W.F., of the First Christian Church, serving in all offices. She was also president of the Mr. and Mrs. Class, a member of Gems of the Salt Plains and Red Hat's Society and a long-time member of the Alfalfa County Election Board. Ann was preceded in death by her parents, her husband Paul, a brother JC Bowles and a daughter Paulette West. Elizabeth is survived by her daughter Pamela and David Patton of Vienna, Missouri and her son Charles and Shirley Murrow of Alva, Oklahoma, 9 grandchildren, Jim and wife Lisa West, Shawn and wife Nena West, and Scott West, Tracy and Freddie Shiver, Sara and Phil Barry, Ross and Mindy Patton, Bill and Laura Patton, Charlsie and Justin Harty, Cody and Crystal Murrow, 20 great-grandchildren, Jordan and wife Karli West, Ellerie West, Cole and Macie West, Harrison and Sydney West, Jessica, Lane and Blake Shiver, Grant and Paige Barry, Braeden and Alayna Patton, Benton and Weston Patton, Jaxon, Dylan, and Adisyn Harty, Brooklyn and Jenna Murrow, a sister Mary Ellen Crockett and husband Jerry of Stillwater, Oklahoma, 2 special daughters, Marta Aquino of Chicago, Illinois, and Delia Sabundayo of Maryland as well as numerous nieces, nephews, cousins and other relatives and friends. Memorial contributions may be made through Wharton Funeral Chapel to the hospice Circle of Love in Enid, OK, Greenbrier Village Nursing Home Activity Fund or the Mr. and Mrs. Class at the Cherokee First Christian Church.

Elizabeth Ann daughter of Alice (Hayes) and Cleo Bowles was born April 16, 1925 in Cherokee, Oklahoma. She passed away on July 25 in Enid, Oklahoma, at the age of 91 years, 3 months and 9 days. Ann attended Lambert High School and... View Obituary & Service Information

The family of Elizabeth Ann Murrow created this Life Tributes page to make it easy to share your memories.

Send flowers to the Murrow family.