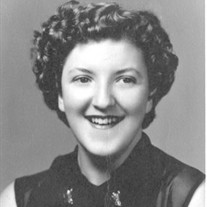 Elfreda Fae, daughter of Agnes Lucretia (Leatherman) and Raymond Harold Corr was born on a farm north of Burlington on September 4, 1934, the youngest of five children. She passed away at her home on the 4th of August at the age of 75 years and 11 months. She attended the Capron School System where she graduated with the class of 1954. She meet and courted Donald Dee Rogers when he returned from Germany after WWII. They were married on May 5, 1956 in Medicine Lodge, Kansas. To their marriage four children Lucretia, LaDonna, LaVonne and Lindsey were born. Following their marriage they made their first home in the old hardware store in Hardtner, and then they moved one mile south and two east on the George Winn Farm. Elfreda enjoyed living on the farm with Donald, doing jigsaw and crossword puzzles, embroidering, collecting salt and pepper shakers, tending to her flowers and plants and canning. Elfreda was a very friendly person who loved people and loved being with her six grandchildren. In her later years she was bound to a wheelchair but that didn’t stop her from going. She was a member of the Hardtner United Methodist Church and UMW and President of the Stateline Women’s Auxiliary post #175. Mrs. Rogers was preceded in death by her daughter Lucretia Rogers, her parents, a Sister Donna Mae Haynes and two brothers Laverne and Lawerance Corr. Elfreda is survived by her husband Donald, two daughters, LaDonna and Bill Rose of Kiowa, Kansas and LaVonne Brewer of Tulsa and a son Lindsey of Alva. Six grandchildren, Leroy Don Brewer of Enid, Eleanor and Brad Navarro of Iuka, Kansas, Lara Inman of Tulsa, Carrie Jane and Jeremy Moon of Pratt, Kansas, LaShawna Kay Brewer of Osage, Robert Joseph Rose of Hutchinson, Kansas. A brother, Lester Corr, two aunts, Hazel Leatherman and Melva Terbush. A number of nieces, nephews, other relatives and friends. A visitation with the family will be Friday evening from 6 P.M- 8 P.M. at the funeral Chapel. PDF Printable Version

Elfreda Fae, daughter of Agnes Lucretia (Leatherman) and Raymond Harold Corr was born on a farm north of Burlington on September 4, 1934, the youngest of five children. She passed away at her home on the 4th of August at the age of 75 years... View Obituary & Service Information

The family of Elfreda Fae Rogers created this Life Tributes page to make it easy to share your memories.

Send flowers to the Rogers family.