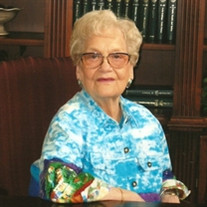 Eleanor M. daughter of Alta (Miller) and Frank Scripsick, was born on March 28, 1926 at Anthony, Kansas. She passed away at the Enid St. Mary’s Regional Medical Center on June 27, 2010, at the age of 84 years, 2 months and 29 days. She attended the Sacred Heart Grade School and graduated from the Capron High School with the Class of 1944. Following High School she attended Modeling School in Denver, Colorado Eleanor was married to Dale E. Pulliam on October 12, 1946 at the Alva Sacred Heart Catholic Church. To their marriage four sons, Preston, Marty (Doc), Kelly and Skyler were born. Following their marriage they lived in Nashville, Kansas then returned to Woods County and in September of 1969 they moved to Alva to make their home. Eleanor was a member of the Alva Sacred Heart Catholic Church; the Altar Society and Monica Circle. She was an excellent seamstress and cook; and enjoyed her weekly game of Bridge. She was preceded in death by her husband and her parents. Eleanor is survived by her four sons, Preston of Dallas, Texas. Marty (doc) of Enid, Kelly and his wife, Patty of Turpin and Skyler and his wife Deidre of Prosper, Texas; five grandchildren, Kasady and her husband, Joe Bradford of Alva. Kade Pulliam of Oklahoma City, Ashley Pulliam of Dallas, Texas, Sarah and Emily Pulliam both of Prosper, Texas; a great grandson, Kellen Bradford of Alva. A number of cousins and other relatives and friends. PDF Printable Version

The family of Eleanor M. Pulliam created this Life Tributes page to make it easy to share your memories.

Eleanor M. daughter of Alta (Miller) and Frank Scripsick, was...

Send flowers to the Pulliam family.