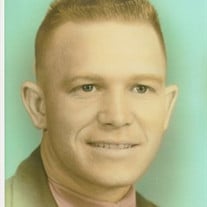 Jack was born April 15, 1935 to Horace and Carrie French Wilson in Freedom, Oklahoma. He passed away at the Overton Brooks VA Hospital in Shreveport, Louisiana on the 22nd of January at the age of 77 years, 9 months and 7 days. He was one of six children; four boys and two girls. Jack joined the Army on February 25, 1954 and made a career of it retiring after twenty years of service to his Country. He served two tours in Korea, one tour in Vietnam, three tours in Germany, and one tour in Hawaii. While serving in the military he was awarded the Bronze Star Medal with “V” Device 2d Oak Leaf Cluster, Army Commendation Medal 1st Oak Leaf Cluster, Armed Forces Expeditionary Medal (Korea), Republic of Vietnam Campaign Medal with 60 Device, Vietnam Service Medal with 3 Campaign Stars, 6 Service Stripes, 1 Overseas Service Bar, Good Conduct Medal (4th Award), Army Occupational Medal (Germany), Republic of Korea Presidential Unit Citation Badge, and the National Defense Service Medal with Oak Leaf Cluster. After retiring from the military, he resided in Missouri with his wife and children for a year. Then he moved his family to his hometown and bought his family’s grocery store upon his Mom and Step-Dad’s retirement and also went into partnership with his oldest brother, Dean, to purchase a wheat and cattle farm. After two years, he then moved his family to Poplar Bluff, Missouri and purchased another cattle farm. The Wilson family then moved to Hemphill, Texas where they owned and operated another grocery store and an R.V. Campground on Lake Toledo Bend. His final move was to Carthage, Texas in 1981 to go into the gas station business. From that point forward, Jack remained in Carthage. He was very active in the community and known and respected by all. He was known for his sense of humor and love of life. He never met a stranger and was always available to help anyone in need. His pride and joy was his family. He was a loving, supportive, giving and devoted husband, father, and Pop to his wife, children, and grandchildren. He lived for his family and especially loved the family gatherings and holidays they shared together. He is preceded in death by his parents, Horace Wilson and Carrie Wilson Knittle, stepdad Hubert Knittle, brothers Dean Wilson, Jim Wilson, and Harold Wilson, sister in laws Betty Wilson, and Mary Jo Wilson. He is survived by his beloved wife, Pat, of 47 years. One daughter, Donna Wilson Alexander and husband, Jamie of Abilene, Texas. Oldest son, John Brian Wilson and wife, Kerry of Allen, Texas. Middle son, Calvin Gene Wilson and wife, Rachel of Carthage, Texas. Youngest son, James William Wilson of Carthage, Texas. He is also survived by his Grandsons: Jarad Dean Alexander, Harrison Jayce Wilson, Bryson Landis Crawford, Easton Cayne Wilson, Payton Winters Alexander, Kade Allen Crawford, Connor Jackson Alexander, Duncan Randall Alexander, James William Wilson II, Jackson Lane Wilson, Trenton Tyler Wilson, and Tripp Wilson. He is also survived by two sisters: Donna Faye Smith and husband Charles of Moreland, Oklahoma, and Linda Rae Elwood and husband Keith of Woodward, Oklahoma. He is survived by numerous nieces and nephews and great-nieces and great-nephews. PDF Printable Version

Jack was born April 15, 1935 to Horace and Carrie French Wilson in Freedom, Oklahoma. He passed away at the Overton Brooks VA Hospital in Shreveport, Louisiana on the 22nd of January at the age of 77 years, 9 months and 7 days. He was one of... View Obituary & Service Information

The family of Earnest "Jack" Wilson created this Life Tributes page to make it easy to share your memories.