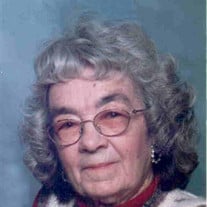 Dorthy May Long, daughter of Lula Agusta (Reed) and James Orville Long, was born on July 17, 1926 on a farm south of Green Valley, Oklahoma. She passed away at Beadles Nursing Home on July 21, 2019 at the age of 93 years and 4 days. She attended the Cedar School and graduated from Dacoma High School with the Class of 1944. Miss Long was married to Soloman Elloy (Roy) Logsdon on October 10, 1951 at Fairview, Oklahoma. To their marriage three sons, Duane, Dale, and Jerry were born. Following their marriage, they lived in Southern Woods County. In 1952 Roy was drafted into the Army to serve in Germany, during the Korean Conflict. While Roy was in the army Dorthy moved in with her parents until he was honorably discharged in 1955, coming home to live on the farm. In 1965 they came to Alva, Oklahoma, to raise their family. She was a stay at home homemaker and in 1978 they Manage the Western Motel on the east end of Alva, until her retirement in 1981. She was a member of the First United Methodist Church and the Dolittle Camping Club of Alva. As a child she loved to play the mandolin with her family, and in later years she played with local musicians in the Alva area. She also loved working in her flower gardens around her house. She was preceded in death by her parents, a sister, a brother and her husband Roy on November 1, 2000. Dorthy is survived by her three sons and their wives, Duane and Janet of Witcherville, Arkansas, Dale and Vicki of Alva, and Jerry and Kay of Enid, seven grandchildren and their spouses, Lori and Eric Miles, Kristopher and Jessica Logsdon, Tami and Brian Hill, Andrea and Drew Durbin, Alyssa Logsdon, Jeremy and Katie Logsdon, Megan and Ryan McCoy, twenty-three great grandchildren, one sister, Norma Ging, and a number of nieces, nephews, other relatives and friends. Contributions may be made in her memory to The Alva Senior Citizens Through Wharton Funeral Chapel.

Dorthy May Long, daughter of Lula Agusta (Reed) and James Orville Long, was born on July 17, 1926 on a farm south of Green Valley, Oklahoma. She passed away at Beadles Nursing Home on July 21, 2019 at the age of 93 years and 4 days. She attended... View Obituary & Service Information

The family of Dorthy May Logsdon created this Life Tributes page to make it easy to share your memories.

Send flowers to the Logsdon family.