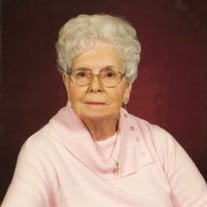 Dorothy Irene, daughter of Nettie Ruth (Campbell) and Frank Phillip Schmitt, was born on September 26, 1924 on a farm northwest of Alva. She passed away at St. Mary Regional Medical Center on the 13th day of October at the age of 85 years and 17 days. She attended the Farry High School and graduated with the class of 1944. On September 29, 1945 in Medicine Lodge, Kansas she was married to Gloyd Lyon. To their marriage three children, Neil, Pam and Vicki, were born. Gloyd passed away December 19, 2000. Together they lived and farmed west of town for many years. They moved to town in 1960. She worked for Crenshaw Flowers for several years. In 1970 she started Dorothy’s flowers which she owned and operated until retiring at the age of 78. She was a charter member of the Women of the Moose. She was the 1st Past Senior Regent, received her Academy of Friendship Degree on April 1, 1977 and her College of Regents Degree on June 1, 1980. Mrs. Lyon was preceded in death by her parents; two sisters, Helen Houston and Pearl Rosser; 2 step sisters and a step brother, Tessie Sandell, Velma Snyder and Leo Schmitt. Dorothy is survived by her three children and their spouses, Pam and Leon “Butch” Corr of Taos, New Mexico, Vicki and David Harzman of Woodward and Neil and Jann Lyon of Grand Prarie, Texas; nine grandchildren and their spouses, Amie and Gary Willeford of Perryton, Texas, Heather and Wes Reames of Kingman, Kansas, Zeb and Andrea Lyon of Casper, Wyoming, Ray Lyon of Fairview, Blake and Stephanie Hickman of Lahoma, Ashley and Brandon Miller and Amanda Harzman of Woodward, Amber and Donnie Grider, Ashlie and Charlie Epperly all of Oklahoma City; seven great-grandchildren, Hunter, Keeton, Marley, Katelyn, Ava, Henson and Adrian; five sisters, Goldie Lancaster, Katherina and her husband Maynard Arndt, Mary Schmitt, Margaret and her husband Larry Snow all of Alva, Eva Cleary of Summerville, South Carolina; a brother, Ed and his wife Alice Schmitt; a number of nieces, nephews, other relatives and friends. PDF Printable Version

Dorothy Irene, daughter of Nettie Ruth (Campbell) and Frank Phillip Schmitt, was born on September 26, 1924 on a farm northwest of Alva. She passed away at St. Mary Regional Medical Center on the 13th day of October at the age of 85 years and... View Obituary & Service Information

The family of Dorothy Irene Lyon created this Life Tributes page to make it easy to share your memories.

Send flowers to the Lyon family.