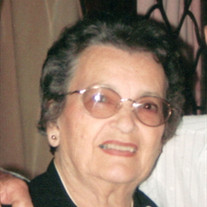 Funeral services will be at the Friends Church in Cherokee, Friday July, 11, 2014 at 10:00A.M. Doris M. Harvey Schanbacher, was born on July 29, 1927 in the family’s farm home north of Carmen to Veatrice Rose Middleton Harvey and James Richard Harvey, the fourth of seven siblings. Her arrival fell on a rare summer evening so cool their heating stove had to be fired up to keep their precious new baby warm. She passed from this life on July 7, 2014 surrounded by family. Doris was only two years old when Wall Street fell in 1929, making her a true child of the Depression Era. Later, her four years at Carmen High School were the four years of War II. Both were strong factors in her life, helping to develop her strength, determination, and compassion. After graduation, Doris moved to Cherokee where she lived in a boarding house with her older sister Norma, who helped get her a job at Key’s Drug Store where she also worked. With no cars, Doris and Norma walked to work and road the Doodlebug passenger train to Carmen to visit family. Future husband Lyle came often to the drugstore for his favorite pineapple malt, served up by his adoring and beautiful girlfriend. Doris’s brief career in the public ended when they were married by her uncle on December 8, 1946 in Alva. Together, Doris and Lyle began farming, living in the Cherokee, Carmen and Lambert areas. Soon they started their family and Marlene was born, followed by Dorlene, and Rocky. Their family and farm operation became Doris’s chosen life’s work, one in which thrived. She loved gardening, sewing, cooking and baking. Birthday cakes were never simply delicious – they were decorated beautifully. Chicken and homemade noodles were her specialty and any leftovers prompted a friendly fight over who would get to take them home. Volunteering was also a vital part of her life. As a member of Prairie Valley United Methodist Church, Doris worked countless hours serving in various UMW positions, organizing/serving funeral dinners, and serving at the local thrift shop. Doris and Lyle especially enjoyed attending their grandchildren’s sporting events, vacationing in the mountains, and taking bus tours with friends. Doris is survived by three children, Marlene Buck and husband Jim of Cherokee, Dorlene Walker of Tulsa, and Rocky Schanbacher and wife Michele of Cherokee; her grandchildren Chris Parker and husband Shane of Cherokee, Angie Buck of Cherokee, Jamie Beisel and husband Joe of Duncan, Brandon and Lauren Walker of Tulsa, Justin, Landon, and Katie Schanbacher of Cherokee; great grandchildren Hailey, Joel, and Wyatt Parker and Jordan Beisel; brother Don Harvey and wife LaDonna of Enid, brother Jerry Harvey and wife Edyce of Macomb, sister-in-law Lois Walker of Cherokee, brother-in-law Gene Schanbacher and wife Priscilla of Murray, Kentucky, sister-in-law Verna Ruth Schanbacher, and a host of nieces and nephews. She was preceded in death by her parents, husband Lyle, sisters Lois Skipwith and Norma Brooks, and brothers Harold Harvey and Jack Harvey. PDF Printable Version

Funeral services will be at the Friends Church in Cherokee, Friday July, 11, 2014 at 10:00A.M. Doris M. Harvey Schanbacher, was born on July 29, 1927 in the family&#8217;s farm home north of Carmen to Veatrice Rose Middleton Harvey and James... View Obituary & Service Information

The family of Doris Margy Schanbacher created this Life Tributes page to make it easy to share your memories.

Funeral services will be at the Friends Church in Cherokee, Friday...