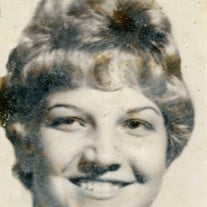 Donna Charleen, daughter of Zelma Leatha (Arb) and Lawrence Perry Arndt was born April 25, 1943 at the Alva General Hospital. She passed in Enid at St. Mary’s Regional Hospital on the 8th day of September, 2013 at the age of 70 years, 4 months and 14 days. She attended the Alva Public School System. On April 12, 1963 at the Alva Church of the Nazarene she was married to Robert Dean Herren by Reverend Meade. To this marriage four children; Rod, Dennis, Randall and Dianna were born. Shortly after their marriage Dean was drafted into the US Army and spent two years in Germany while Charleen remained in Alva and maintained their home. Following his return they made Alva their home until 1975 at which time they moved to Dacoma to make their home. Mrs. Herren worked for Whittet’s Country Store in Dacoma and sold Avon for over 30 years. She was a member of the Dacoma Church of God, enjoyed canning and took great pride in being a homemaker, taking care of her son Dennis and making large meals for her family. Family preceding her in death are: her parents; a brother Neal Arndt; a sister in law Verna Mae Arndt and a brother in law Bert Neuenschwander. Charleen is survived by her husband Dean of the home; Rod and Andrea, Dennis, Randall and Donna, Dianna and Rick Eldridge. Nine grandchildren: Lynell, Joshua, Jessica, Daphne, Dalton, Shanea, Bralyn, Sasha, and Elijah. Five great grandchildren: Xaiver, Talon, Aleana, Teagan, and Allison. Three sisters: Glenda and Chuck Yarberry, Jaunita Neuenschwander, Nadine and Dennis Painton. Six Arndt brothers: Lowell and Sharon, Darrell, Wilford and Mary, Lyle and Dorothy, Larry and Sandie, Gary and Linda. A host of nieces, nephews, other relatives and friends. PDF Printable Version

Donna Charleen, daughter of Zelma Leatha (Arb) and Lawrence Perry Arndt was born April 25, 1943 at the Alva General Hospital. She passed in Enid at St. Mary&#8217;s Regional Hospital on the 8th day of September, 2013 at the age of 70 years,... View Obituary & Service Information

The family of Donna Charlene Herren created this Life Tributes page to make it easy to share your memories.