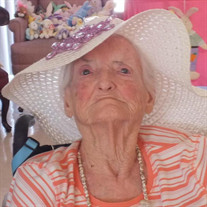 Dollie Earleen, was born in St. Grove, California, on November 11, 1937 to Viola (Ceacle) and George Dimond. She passed away on Saturday, August 22, 2020, at 6 a.m. at Beadles Nursing Home in Alva, Oklahoma, at the age of 82 years, 9 months and 11 days. Dollie attended school in St. Grove, California, and worked as a farm laborer, and at Oklahoma State University as a custodian. She was common law married to James Edward Barber when she was 17. She married Raymon Eugene Cooksey in 1959 and they were married until his death on March 24, 1992. She then married Vernon Alton Logsdon on November 13, 2002. She was preceded in death by her common law husband, James Edward Barber, and her second husband, Raymon Eugene Cooksey, her daughters Loretta Frazee and Margaret Ann Bay. She is survived by her current husband, Vernon Alton Logsdon, her children, Diane Gerth, Eddie Sewell, Gerald Cooksey, Carrol Cooksey, Johnny Cooksey and Michael Cooksey. She is also survived by many other relatives and friends.

The family of Dollie Earleen Logsdon created this Life Tributes page to make it easy to share your memories.

Dollie Earleen, was born in St. Grove, California, on November...

Send flowers to the Logsdon family.