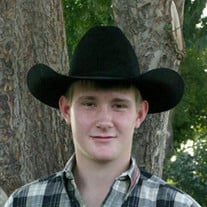 Denton Eugene son of Mary Deanne (Black) and Dwight Lynn Shepherd was born on July 31, 1989 in Liberal, Kansas. He passed away suddenly in an automobile accident eight miles west of Alva, Oklahoma on the 18th of May, 2009 at the age of 19 years, 9 months and 18 days. He was a 2008 graduate of Southwestern Heights High School near Plains, Kansas and was currently attending Northwestern Oklahoma State University in Alva, Oklahoma. Denton was studying animal nutrition and working at Northwest Feed and Seed Company in Alva to gain experience in his chosen field of study. He was a member of the NWOSU Rodeo Team where he competed in the team roping. Team roping was one of Denton's favorite hobbies and he loved to rope heels for his brother Dallas. Denton was a four year Kansas High School Rodeo Association member. He represented Kansas at the National High School Finals in team roping his freshman and sophomore year and cutting during his junior year. He also competed in calf roping. Other memberships included National Intercollegiate Rodeo Association, United State Team Roping Championships and he belonged to the First Southern Baptist Church in Liberal, Kansas. Along with rodeo, he was an avid football and basketball player and lettered all four years in high school. He was recognized by the 3A All-State Coaches Association for 2007-2008 for outstanding defensive play and led the state with the most tackles in 3A. In his free time Denton enjoyed hunting deer and found it great fun to hunt jack rabbits. He loved the outdoors. He shared the love of the outdoors with his father Dwight Shepherd and brother Dallas. Denton was a great son, brother, and friend to many. His friends will remember him for his outgoing personality and his quirky sense of humor. He will be greatly missed. Denton was preceded in death, by his mother, Deanne on May 16, 1997, his grandparents, Clifford “Tug” Shepherd, Gene Black, and Mary Francis Embry Black. He is survived by his father, Dwight; brother, Dallas; grandmother, Barbara Shepherd; two step-grandmothers, Bonnie Shepherd and Sue Black; aunts and uncles: Larry and Tita Black, Duane and Teresa Shepherd, Scott Shepherd, Jennifer Black, Eileen and Jim Blakemore, and Dwana and Mark Farnsworth. Denton had several cousins There will be no visitation; however there will be a guestbook to sign at the Wharton Funeral Chapel. PDF Printable Version

Denton Eugene son of Mary Deanne (Black) and Dwight Lynn Shepherd was born on July 31, 1989 in Liberal, Kansas. He passed away suddenly in an automobile accident eight miles west of Alva, Oklahoma on the 18th of May, 2009 at the age of 19 years,... View Obituary & Service Information

The family of Denton Eugene Shepherd created this Life Tributes page to make it easy to share your memories.

Send flowers to the Shepherd family.