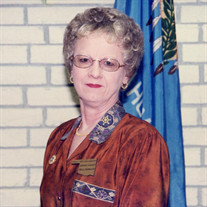 Della M. Dunnigan was born April 9, 1943 to John and Fannie Gerrels Walz in the Alfalfa County Hospital in Cherokee, OK. She passed away on June 22, 2020 in Alva, OK at the age of 77. The funeral service will be Thursday June 25, 2020, 10:00A.M. At the First United Methodist Church in Alva with internment at the Alva Municipal Cemetery under the direction of Wharton Funeral Chapel. Della was raised on a farm west of Cherokee, OK, and graduated from Cherokee High School in 1961 and went on to attend NWOSU in Alva. On August 12, 1962, she was united in marriage to Dale L. Dunnigan at the First Christian Church in Cherokee, OK. To this union, one daughter was born, Denise Lyn Dunnigan Emmer. After working at various jobs in Alva, she began working at the District Court Clerk’s Office in 1976 at the Woods County Courthouse as a Deputy Court Clerk. In 1986, she was elected Court Clerk and served for 39 years before retiring in 2014. She was a member of the Alva First United Methodist Church and served in various areas of the church including Chairman of the Administrative Board. She continued serving her church in her retirement. She also was a member of the Woods County Republican Women. As a master seamstress and baker, Della never met a cake or cookie she could not bake or a piece of clothing she could not make or mend. She loved her family, her Boston Terriers and her African Violets. Della was predeceased by her parents, John and Fannie Walz and by her two brothers, Lyle Walz and Charles Walz. She is survived by her husband of 57 years, Dale L. Dunnigan of the home and her daughter Denise and son-in-law Chris Emmer of Metairie, Louisiana. Also surviving are three nephews, Steve and Barbara Walz of Kiowa, KS, Mike and Raquelle Walz of Alva and Marc Walz of Alva. In lieu of flowers, memorials can be made to Hannah Circle of the First United Methodist Church or to Creature Concerns with Wharton Funeral Home as Custodian.

The family of Della M. Dunnigan created this Life Tributes page to make it easy to share your memories.

Send flowers to the Dunnigan family.