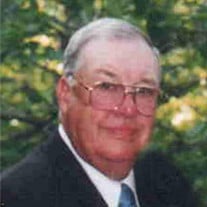 Delbert George, son of Velma (Holt) and Harry Rhodes was born on June 7, 1939 in Alva, Oklahoma. He passed away at Share Convalescent Home on January 13, 2022 at the age of 82 years, 7 months and six days. He attended the Alva School System and graduated with the class of 1957. He started working at a young age helping Bob and Verda Smith with the Ranger Café, seining minnows with his dad, and working at Blakemore Grocery. He worked as a store manager for Safeway grocery stores in Dodge City, Kansas and later spent many years as a produce manager for Safeway, then Homeland, and Alva’s Market. Delbert played a big role in the startup of Alva’s Market. In the 1970s, while working at Safeway, he was also the owner /manager of the Family Shoe Mart in Alva. Delbert loved to fish with his father Harry and many other friends as the years went by. Some years during spring break, he and his friends would take fishing trips to the Lake of the Pines. He was an avid hunter and began selling and collecting guns and fishing equipment long before he opened Pony Boy Lures and Guns in the early 1980s. He and his friends, Jim Hannaford and Jerry Cox, would attend the annual Elvis convention in Memphis, Tennessee, where they bought and sold memorabilia. He cared for his mother and cousin Elvin in their home for many years. He was very careful with his possessions and took great pride in his pickup, boats, and property. Delbert served for more than 20 years with the Alva volunteer fire department and the Oklahoma National Guard, where he was a supply sergeant and performed his duties long and well. In 1964, he was married to Vicki Turner Tafe. To this marriage one child, Daren Michael Rhodes, was born. He was also a loyal father to his stepdaughter, Venesa White. Later, after years of being single, Delbert started courting Lucille Sneary. After nine years of dating, the two were married on April 30, 2003 in Eureka Springs, Arkansas. The pair were loving companions and traveled to many bowling tournaments all over the country. Delbert sponsored a bowling team in Alva for several years. Delbert was a faithful member of the Barnes St. Church of Christ, attending regularly until his health prevented it. He was preceded in death by his parents and twin infant brothers. Delbert is survived by his wife, Lucille of the home; son Daren Rhodes of Tucson, AZ; daughter Venesa (Steve) White of Tulsa, OK; son Bart (Shari) Sneary of Dundas, MN; daughter Alice (Val) Schmidt of Dover, NH; sister Genevieve (Ernie) Farris of Alva; grandchildren Tegan, Lexie and Chandler Rhodes, Eli and Parker Sneary, and Gracie, Maria and Caroline Schmidt; niece Leah (Kevin) Haines of Oklahoma City. bonus sister Connie (Jesse) Truax of Leesburg, FL; as well as several cousins and special friends. In lieu of flowers, contributions may go to the Barnes Street Church of Christ through Wharton Funeral Chapel.

Delbert George, son of Velma (Holt) and Harry Rhodes was born on June 7, 1939 in Alva, Oklahoma. He passed away at Share Convalescent Home on January 13, 2022 at the age of 82 years, 7 months and six days. He attended the Alva School System... View Obituary & Service Information

The family of Delbert Rhodes created this Life Tributes page to make it easy to share your memories.