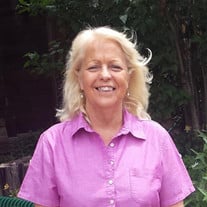 Debra Ann (Ford) Hogan, 67, of Alva, Oklahoma passed away Friday, January 25, 2019 after bravely battling cancer. She was preceded in death by her parents Delbert and Armena Ford of Fredonia, Kansas and her brother Marvin Ford of Independence, Kansas. Survivors include her husband, Larry Schmidt; her son, Michael Hogan and his wife, Shanda of Fort Collins, Colorado and their children, Braden Hogan and Ciara Johnson; her stepson, Brody Schmidt, his wife, Rebecca and their children Lyla and Kelsey, all of Nash, Oklahoma; her stepdaughter, Ashley Krause, her husband, Jay and their children Henry, Alice and Lucy, all of Denver, Colorado; as well as numerous nieces and nephews. Debra was born on November 2, 1951 in Cedarvale, Kansas and was raised on Hudson Ranch. After high school, she married Aden Hogan, Jr. of Fredonia, Kansas. They had a son, Michael, who became the center of her world. While living in Grand Junction, Colorado, she began working in the aviation industry, the focus of her career for the next decade. Her work in aviation led her to Texas, where she worked for B F Goodrich Aerospace and developed a love for sailing and sports cars. Debra graduated Cum Laude and as the top senior in the W. Frank Barton School of Business with a bachelor of business administration from Wichita State University in 2001. While in school, Debra met Larry Schmidt, who she would eventually marry and with whom she would spend the remainder of her life. Shortly thereafter, she began teaching computer science at Northwestern Oklahoma State University where she also obtained her Master's Degree in Education. She enjoyed teaching and her passion was her students. In 2015, Debra retired from NWOSU so she and Larry could travel and spend more time together. When not traveling, she worked at SPI in Alva, assisting her step-son and several of her former students. Known as Gigi or "Grandma Hut", Debra thoroughly enjoyed her grandkids and always found a way to become interested in the things that interested her friends and family. She impacted so many lives and will be greatly missed. In lieu of flowers, the family suggests donations to the Northwestern Foundation, with the Debra Hogan Memorial fund noted. Online donations may be made through the Foundation website (www.imaginenorthwestern.com), designating the donation for the Debra Hogan Memorial fund.

Debra Ann (Ford) Hogan, 67, of Alva, Oklahoma passed away Friday, January 25, 2019 after bravely battling cancer. She was preceded in death by her parents Delbert and Armena Ford of Fredonia, Kansas and her brother Marvin Ford of Independence,... View Obituary & Service Information

The family of Debra Ann Hogan-Schmidt created this Life Tributes page to make it easy to share your memories.

Send flowers to the Hogan-Schmidt family.