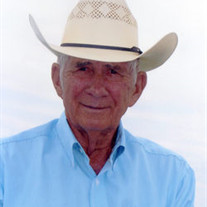 Calvin Dean, son of Carrie (French) and Horace Wilson was born on April 29, 1932 at Freedom, Oklahoma. He passed away at the Enid Integris Northwest Specialty Hospital on the 18th of April lacking 11 days of reaching his 77th birthday. He attended the Huston Valley, Pleasent Hill rural grade school and the Freedom High School. Dean was married to Helen Elizabeth (Betty) Hackney on April 29, 1951 at Alva, Oklahoma. To their marriage five children, Ro Ann, Randy, Sharil, Darol, and Carol were born. Betty passed away on November 6, 2004. Following their marriage they lived and worked in Comanche County, Kansas area for Lloyd Hackney, the Parker and Beeley Ranch and the Gregg Ranch until moving to Mooreland working for Western Farmers Electric, then to Freedom and operated the Freedom Propane Company. He also Farmed and Ranched. He was a member of the Freedom United Methodist Church and the Freedom Masonic Lodge. He was preceded in death by his parents and two brothers, Harold and Jim. Dean is survived by his three daughters and their husbands, Ro Ann and Kim Singhurse of Terre Haute, Indiana, Sharil and John Hardy of Oklahoma City, Carol and Jack Bowers of Cherokee, two sons, Randy of Freedom and Darol and his wife Cathee of Monte Vista, Colorado. Fourteen grandchildren and their spouses, Damon and Nikki Jarvis, Trevor and Pam Jarvis, Steve and Lindsey Jarvis, Grant Singhurse, Brittney and Brad Taylor, Jason Hardy, Shan and Rona Wilson, Sabrina and Dallas Watson, Brent, Blythe and Carrie Bowers, Olivia, Beau and Adele Wilson; nine great grandchildren, Jonathan, Preston and Ty Jarvis, Nick and Alex Jarvis, Chism and Colby Watson, Shay Wilson, and Ava Singhurse. Two sisters and their husbands Donna and Charles Smith of Mooreland, and Linda and Keith Elwood of Woodward and a brother and his wife, Jack and Pat of Carthage, Texas. A brother-in-law, Vernie Hackney of Alva, a number of nieces, nephews, and other relatives and friends. Contributions may be made in his memory to the Freedom School Scholarship foundation in care of the Freedom State Bank. PDF Printable Version

Calvin Dean, son of Carrie (French) and Horace Wilson was born on April 29, 1932 at Freedom, Oklahoma. He passed away at the Enid Integris Northwest Specialty Hospital on the 18th of April lacking 11 days of reaching his 77th birthday. He attended... View Obituary & Service Information

The family of Dean Wilson created this Life Tributes page to make it easy to share your memories.