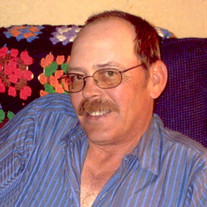 David Carl, son of Rowena Arlene (Coin) and Kenneth Victor Stoner, was born in Alva, Oklahoma on July 23, 1956. He passed away at the Enid St. Mary’s Regional Medical Center on the 4th day of February at the age of 53 years, 6 months and 12 days. He attended the Alva School System and graduated with the class of 1975. In November 1974 he joined the 45th Division of the 189th Field Artillery, serving for 23 years. On May 26, 1979 he was married to Natalie Carol Whitley-Brown at the Alva First United Methodist Church. To their marriage four children, Shawn, Misty, Kara and Kimberly were born. Following their marriage they lived in Alva working for John Deer, then Egner Construction Co. They went to Wakita and he worked for Grant County as a grader operator for 11 years and then returned to Alva and he began working at Devery Implement. In 2000 he started working at Northwestern University in the Maintenance Department. He also helped his uncle during harvest for many years. David was a member of the Alva First United Methodist Church. Mr. Stoner was preceded in death by his father Kenneth in 1962 and his step father Marvin Cox in 1997 and his uncle Stanley in 2003. David is survived by his wife Natalie of the home; a son and his wife, Shawn and Jennifer of Arkansas City, Kansas; three daughters and their husbands, Misty and Thomas Mink of Woodward, Kara Stoner and Charles Willhite of Alva and Kimberly and Greg Chaffin of Alva. Seven grandchildren, Brayden, Bryson and Brody Stoner, Kegan, Connor and Keelin Mink, Michael Willhite. His mother Rowena Stoner-Cox of Alva; two sisters Janet and her husband Zeke Miller of Sapulpa, and Kathryn Schwerdtfeger of Alva. Three brothers and their wives, Ken and Glenda of Coweta, Doug and Linda of Gainesville, Texas and Gary and Debbie of Carmen; a number of nieces, nephews, other relatives and friends. PDF Printable Version

David Carl, son of Rowena Arlene (Coin) and Kenneth Victor Stoner, was born in Alva, Oklahoma on July 23, 1956. He passed away at the Enid St. Mary&#8217;s Regional Medical Center on the 4th day of February at the age of 53 years, 6 months... View Obituary & Service Information

The family of David Carl Stoner created this Life Tributes page to make it easy to share your memories.

Send flowers to the Stoner family.