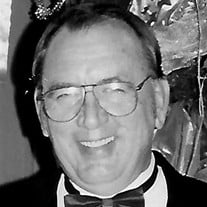 David Lynn Cox of Alva, Oklahoma, passed from this life March 29, 2019 at the age of 75 years and one month. David was born February 25, 1944, in Alva to Fred and Wilma Jean Wesner Cox, the second of their four children. He married Freeda Bird in 1965; to this union three sons were born, Anthony, Jason, and Brandon. He was a proud father of three and grandfather of five. In 1988 David married Beverly Rogers Weinhoffer Cox, with whom he resided at the time of his death. With this union David gained four children, and over the years, 13 grandchildren, and 9 great-grandchildren. David was a dedicated father, who sacrificed daily for the welfare of his family. His fifty years as Professional Registered Land Surveyor took him to many parts of the world although he always returned to Alva. During his career, he surveyed for the Naval Oceanographic Office, Washington D.C. surveying the bottom of the ocean floor from the North Atlantic to the Western Pacific. Later he worked for NASA in Maryland. David was a skilled draftsman, working for various architectural, surveying and engineering firms ranging from Maryland, New Jersey, Tennessee, Colorado, Texas, New Mexico, and Oklahoma. In 1982 he began his own business, D.L. Cox Land Surveying, which he pursued until his death. He served as District Chairman ofOSLS, Oklahoma Society of Land Surveyors. An avid and award winning landscape photographer, hobby winemaker, and voracious reader of science fiction, he found time to ride his classic 1968 Norton 750 Commando motorcycle. His trips across country did occasionally find him stranded in remote locations. David took pleasure in helping others in need and was fondly known as a generous, sacrificial man who shall be greatly missed by his many friends, clients and family. David was preceded in death by his mother and father and his beloved son, Brandon Garth Cox. He is survived by his sons Anthony and Jason, and their children, Brendan Cox, Christopher Cox, Danielle Cox, Mikala Cox, and Zachary Cox. David's two brothers, James and Larry, and their families, his sister, Barbara Feezell, and her family mourn his passing. His survivors include Beverly, of the home, and his extended family of children, grandchildren and great-grandchildren. As was his wish, his body was cremated and a Wake in his honor will be held on Friday May 10 at 7 p.m. in the Fireside Room of the Cherokee Strip Museum in Alva. His remains will be interred with his son at the Alva Municipal Cemetery.

David Lynn Cox of Alva, Oklahoma, passed from this life March 29, 2019 at the age of 75 years and one month. David was born February 25, 1944, in Alva to Fred and Wilma Jean Wesner Cox, the second of their four children. He married Freeda Bird... View Obituary & Service Information

The family of David Lynn Cox created this Life Tributes page to make it easy to share your memories.

Send flowers to the Cox family.