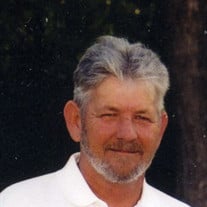 Darrell Dean was born to Opal (Mennefee) Whitely and Clyde Whitely at Alva, Oklahoma March 3, 1945 and passed away September 20, 2016 in Enid, Oklahoma at the age of 71 yrs. 6 Mos. and 17 days. He attended Alva Public Schools, was drafted into the Army in January, 1966 and was honorably discharged January 1968. Darrell served as a medical corpsman in Viet Nam. He was a Volunteer Fireman for the City of Alva from 1969 to 1989 when he retired. He worked for the City of Alva before going to work for Williams Natural Gas in 1977 retiring after 30 years in 2007. Darrell married Lana Dickey in 1968 at Capron, Oklahoma. To this union two sons, Danny and Darren Whitely. He married Linda Yoachum in June, 1995 in Eureka Springs, Arkansas and became the father of Cody Yoachum. The family lived in Alva. One of the most significant parts of his life was becoming a grandfather to Dylan in 2001 and Ashlyn in 2006. His life revolved around these two children seeing that they went wherever they wanted to go and getting whatever they wanted. He was preceded in death by his parents, five siblings: Vernon, Josephine, Mary Ann, Charles & Debra and five nieces and one nephew. He is survived by his wife Linda of the home, sons, Danny and his wife Rebecca of Wichita Falls, Texas, Darren and wife Marisa of Alva, Oklahoma, Cody Yoachum of Oklahoma City, Oklahoma and the two beloved grandchildren, Dylan and Ashlyn Whitely of Alva, Oklahoma, his sister Arlene Hada of Alva, brother Gary Don and wife Elaine of Cherokee, Oklahoma, his mother-in law, Phyllis Ashton of Alva, and many nieces and nephews, other relatives and friends. In lieu of flowers contributions may be made to the Alva Volunteer Fire Dept. of Alva thru Wharton Funeral Chapel.

Darrell Dean was born to Opal (Mennefee) Whitely and Clyde Whitely at Alva, Oklahoma March 3, 1945 and passed away September 20, 2016 in Enid, Oklahoma at the age of 71 yrs. 6 Mos. and 17 days. He attended Alva Public Schools, was drafted into... View Obituary & Service Information

The family of Darrell D Whitely created this Life Tributes page to make it easy to share your memories.

Send flowers to the Whitely family.