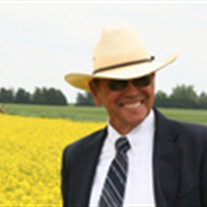 Darrell Dean, son of Paul and Hazel (King) Surface was born on the family farm north of Alva on April 16, 1936. He went to be with the Lord on March 3, 2010 at the age of 73 years, 10 months and 15 days. Darrell was born on the family farm north of Alva, OK on April 16, 1936 to Paul and Hazel (King) Surface. He attended Alva Public Schools where he served as FFA secretary, Key Club secretary, and played third base for the Alva Goldbugs. He graduated high school in 1954. While attending Oklahoma A&M, he was a member of Alpha Gamma Rho fraternity and the Block and Bridle Club. After graduating college in 1958, with a BS in Animal Science, Darrell worked for many ranches in west Texas as a herdsman of registered show Herefords. On June 4, 1960, he married Sandra Brown in Rhome, Texas. To this union were four children; Virginia Lee, Patricia Louise, D. Dean, and Marianna Lizabeth. Darrell began his 38 year career in the farm implement field in 1967 with John Deere. He served over 20 years of his career as owner and manager of Kiowa Service, Inc. Darrell enjoyed flying single engine, multi-engine and turbo prop planes. He earned his private pilot license in 1976 leading him to become a Cessna dealer in Seiling, OK. He was an experienced pilot logging over 3000 hours in over 30 different airplanes. Darrell was elected Mayor of Kiowa and held that position from 1992-2000. He later worked for 6-L Trucking. At the time of his death, he worked for High Sierra Energy, LP out of Zenda, KS. In addition to flying, Darrell enjoyed several hobbies. He loved to golf with his wife and family. He was an excellent pianist and enjoyed spending time with his grandchildren. One of his favorite times of the year was Grand Week in which all of his grandchildren came to visit. Darrell is preceded in death by his parents, Paul and Hazel Surface; mother-in-law, Alice Willis; father-in-law, Samuel Crouch; step-father-in-law, Melvin Brown and sister-in-law, Barbara Surface. Darrell is survived by his wife Sandra of the home; three daughters, Virginia Rose of Great Bend, KS, Tricia Reiser and her husband, David, of Great Bend, KS, Marianna Farney and her husband, Brandon, of Kiowa, KS; one son, Dean and his wife, Kristi, of Owasso, OK; grandchildren, Priscilla, Melissa, Nicholas, Genesis, and Abigail Rose; Dillon, Bethany, and Kaylee Reiser; Devin and Jillian Surface; Shania, Brian and J.T. Farney; two brothers Dwight and his wife, Irene, of Oklahoma City, Joe and his wife, Jeannie, of Alva, OK; several cousins, nieces, nephews, brothers-in-law, and sisters-in-law. Darrell attended Grace & Faith Fellowship in Alva, OK. Contributions may be made in his memory to the Dry Gulch USA children’s camp in Pryor, Oklahoma in care of Wharton Funeral Chapel. PDF Printable Version

The family of Darrell Dean Surface created this Life Tributes page to make it easy to share your memories.

Darrell Dean, son of Paul and Hazel (King) Surface was born on...

Send flowers to the Surface family.