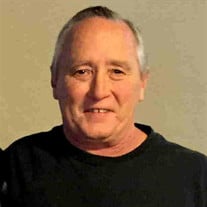 Curtis Lynn, son of Cherry (Webb) and Charles Shirley was born on January 18, 1958 in Topeka, Kansas. He passed from this life at the Share Convalescent home in Alva, Oklahoma with his wife Shelley and family by his side, on Sunday, April 15, 2018 at the age of 60 years, 2 months and 28 days. Curtis served in the Kansas National Guard and learned auto mechanics, a man of many talents, working on just about anything. Fishing (by hand or with a rod and reel), playing bingo or trying his luck on the slot machines were some of his favorite pastimes. Curtis had two children from a previous marriage, Curtis Lynn Shirley Jr. and Patricia(Tricia) Enos. Curtis met his wife Shelley Madison in Osage City, Kansas area and they were united in marriage on October 6, 1983 in Lyndon, Kansas. Shelley had three children Christina Madison, Pete Ortiz and John Ortiz, that Curtis and Shelley raised together. They Continue to live in the Osage City Area several years before moving to Burlington, Oklahoma in the summer of 1984. Curtis was a farm hand for several local farmers and did some mechanical work on the side to help support his family. Curtis continued working as a farm hand for approximately seven years before becoming an over the road truck driver. During this time they had moved from Burlington to Cherokee, and finally to Alva to be closer to his children and grandchildren. He then retired due to his diminishing health and tried to help at the Alva market when he could. We could never keep him from doing small engine repairs even though his body was telling him otherwise. He was preceded in death by both of his parents, Charles and Cherry, two brothers Charles and Corwyn (Corky) and one daughter Christina. He is survived by his wife Shelley of Alva, four sons, Curtis Lynn Shirley Jr. of Illinois, Pete Ortiz of Helena, Oklahoma, John Ortiz of Alva, and Corwyn Madison Shirley (son/grandson) of Alva, Oklahoma, and one daughter Patricia Enos of Oologah, Oklahoma, Three sister, Cheryl Czerniak of Amorita, Oklahoma, Candace Noonan of Burlingame KS and Amy Tyson of Burlingame KS. Two brothers: Craig Shirley of Edmond, OK and Elwood Miller Jr. of Altus, OK. Seven grandchildren: Jessica Ortiz, Brooke Willard, Joseph Ortiz, Mason and Isabell Enos, Serenitie Shirley and Richard Shirley; several nieces nephews and other relatives and friends. In lieu of flowers contributions may be made to the Burlington Fire Department through Wharton Funeral Chapel

Curtis Lynn, son of Cherry (Webb) and Charles Shirley was born on January 18, 1958 in Topeka, Kansas. He passed from this life at the Share Convalescent home in Alva, Oklahoma with his wife Shelley and family by his side, on Sunday, April 15,... View Obituary & Service Information

The family of Curtis Shirley created this Life Tributes page to make it easy to share your memories.

Send flowers to the Shirley family.