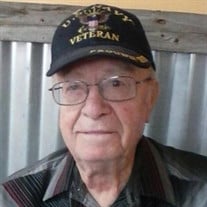 Born February 12, 1935 to Lillie Mae and Earl Leslie Linfoot in Cherokee, Oklahoma. Corkey was the youngest of 10 children and is survived by 3 sons, Eric, Shawn, and Ryan. 6 grandchildren, Emily, Ethan, Evan, Joshua, Jensen, and Wyatt. And... View Obituary & Service Information

The family of Corvin Lincoln Linfoot created this Life Tributes page to make it easy to share your memories.

Send flowers to the Linfoot family.