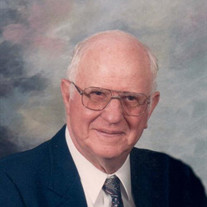 Charles Kenyon Parker was the fifth child of David Preston and Mary Louise (Potts) Parker and was born on 04 September 1920 at his parent&#8217;s home in Buffalo, Oklahoma. He passed away at the Harper County Community Hospital on the 29th... View Obituary & Service Information

The family of Charles K Parker created this Life Tributes page to make it easy to share your memories.

Charles Kenyon Parker was the fifth child of David Preston and...

Send flowers to the Parker family.