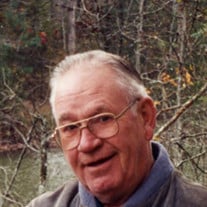 Charles DeVerl Paris was born on Sept 29th, 1928 in Dacoma, Oklahoma to Mary Katherine (Murrow) and Arthur Henry Paris. He died on January 19th, 2013 at the age of 84 years, 3 months and 21 days, after a lengthy battle with cancer. He... View Obituary & Service Information

The family of Charles DeVerl Paris created this Life Tributes page to make it easy to share your memories.

Send flowers to the Paris family.