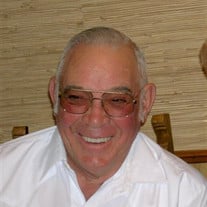 Charles Monroe Newlin son of Charles E. and Frances (Bradford) Newlin, was born on a farm 3/4 miles west of the Pleasant Ridge Cemetery northwest of Carmen, Oklahoma on February 3, 1937. He passed away at his home north of Hopeton, Oklahoma, on October 1, 2016, at the age of 79Yrs., 7 Mos. and 28 Days. Charles started school at Dacoma, went to Carmen and back to Dacoma where he graduated with the class of 1955. During the 6th grade he met Wanona Nelson and they remained friends throughout their school years. Charles and Wanona were married September 4, 1955 at the rural Pleasant View Church. That fall they started college at Northwestern State College. During that semester Charles was offered an apprenticeship to work for the Santa Fe Railroad in Wellington, Kansas. He became a certified carman and 1959 was transferred to Waynoka, Oklahoma. They lived for 10 years on the farm where Wanona was born and raised, and in 1969 took over the farming. Charles and Wanona had two children, Charlene and Greg. He retired from the railroad after 28 years in 1987. He also did a lot of building construction which included a lot of roofing, concrete work and sheetrock finishing. They moved to a home north of Hopeton in 1995 and lived there at the time of his death. He attended the Church of God. His many interests included; mechanic work, building cultured marble items, collecting antique cars and tractors, skydiving and researching his genealogy . Charles was preceded in death by his son, Greg; his parents; and infant sister; a sister, Tava Bontrager; son-in-law, Ron Martin; brother-in-law, Fred Gruner; sister-in-law, Joan Bushman. Charles is survived by his wife. Wanona; daughter, Charlene (Dave) Keller; grandchildren: Charles (Rachel), Kent (Konya), and Ronda Martin; great-grandchildren: Nicholas, Anthony, Dakota, Timothy, Katelee, and Kase Martin; sisters: Betty (Terry) Means, Sue (Paul) Lord; sister-in-law Dolores Gruner; brothers-in-law: Steve Bontrager, Jerald Bushman; and other relatives and friends.

Charles Monroe Newlin son of Charles E. and Frances (Bradford) Newlin, was born on a farm 3/4 miles west of the Pleasant Ridge Cemetery northwest of Carmen, Oklahoma on February 3, 1937. He passed away at his home north of Hopeton, Oklahoma,... View Obituary & Service Information

The family of Charles Newlin created this Life Tributes page to make it easy to share your memories.

Send flowers to the Newlin family.