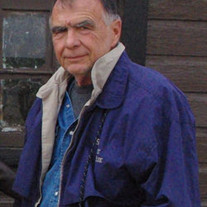 Charles Clifford Allen was born at home on December 8, 1941 near Carmen, OK to Paul C. and Mable L. (Kershner) Allen. He spent his younger years working on the farm and attending school in Dacoma, OK, where he was active in FFA, ultimately achieving the Junior Master Farmer Degree in 1958. After graduating from Dacoma High School he attended college at OSU Okmulgee where he graduated with a degree in Diesel Mechanics. Charles enlisted in the US Army in 1962 and served with the Army Reserve until 1968 when he received an honorable discharge. On May 25, 1963, Charles was married to Glenna Mae Hendricks, and to their marriage 3 children were born. Charles worked as a mechanic and eventually he and his wife started their first trucking company in the mid 1970’s in Oklahoma City. He continued to make his living in the oil business through the late 1990’s working also in Medicine Lodge, KS, Luling, TX, Houston, TX, and Dallas, TX, where he made many lifelong friends. Most recently he co-founded an environmental clean-up company in Houston, which is active in the gulf coast region. Charles purchased a small ranch in east Texas in 1983, which he added to through the years. His ranch in Red River County, near Clarksville, TX, continues to operate today. His long time ranch manager Chris Quick and his wife Shirley become beloved friends. Obtaining his private pilot’s license in 1980 was one of the highlights of his life. Charles owned two planes and his fondness for flying was always evident. He loved animals, aviation and the hard but enjoyable work of ranching. Charles passed from this life on September 3, 2010. He was preceded in death by his parents, and his longtime companion Marilyn O’Brien-Scott. Charles is survived by his children Becky and Joe McCray, Mike Allen, and Connie and Tom Foote, all of Alva, OK, and his former wife, Glenna Mae Hendricks also of Alva. His grandchildren are Colton and Trevor Foote, and Tim Allen of Alva, and Gina (Allen) McDonald, her husband Tyler, and her children Justin and Neveah of Fairview. Memorial services will be held at his ranch in Clarksville, TX, where Charles will be laid to rest. In lieu of flowers the family requests contributions be made on his behalf to the Alzheimer’s Association at P.O. Box 96011, Washington, DC 20090-6011 or by calling 1-800-272-3900. PDF Printable Version

Charles Clifford Allen was born at home on December 8, 1941 near Carmen, OK to Paul C. and Mable L. (Kershner) Allen. He spent his younger years working on the farm and attending school in Dacoma, OK, where he was active in FFA, ultimately achieving... View Obituary & Service Information

The family of Charles Clifford Allen created this Life Tributes page to make it easy to share your memories.

Charles Clifford Allen was born at home on December 8, 1941 near...

Send flowers to the Allen family.