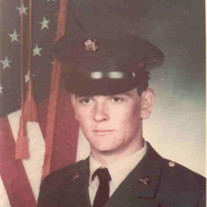 Carlton Ralph Fergason, son of Oleta (Frazier) and Dave Fergason was born on October 16, 1951 in Hobbs, New Mexico; he was the third of six children. He passed away on February 1, 2019 at the age of 67 years, 3 months and 15 days. He graduated from Lueders-Avoco High School where he was in FFA, land judging and raising pigs. In 1972 he joined the US Army serving with the 48th infantry stationed in Germany. After an honorable discharge he worked for Author electric and CJR roustabout In Denver City, Texas. He owned a store in Albany, Texas for a while before working at Cain Electric in Brownwood and helping with auctions in Rising Star Texas. He was a member of the Church of Christ. Carlton was blessed with two children Kevin Ray and Ginger M. His hobbies were fishing and hunting and always had a joke waiting. He was a people person who never met a stranger and would always give you the shirt off his back. His favorite past time was enjoying a cup of coffee and a joke with his brother David. He was preceded in death by two sets of grandparents, Aud and Ada Fergason, Elzie and Willie Frazier, his parents, David and Oleta Fergason, a grandson, Nathaniel Fergason, sister-in-law, Nina Fergason, a nephew, David Wade Fergason and a niece, Sharon J Fergason. Carlton is survived by a son, Kevin Fergason of Harleton, Texas; a daughter Ginger(Curtis) Clark of McAlester, Oklahoma; Three grandsons, Levi and Ace Fergason and Casey Clark; two granddaughters Renea Fergason and Jana (Phillips) Beatly; a special companion, Paula Regian, of Rising Star, two brothers David Fergason of Rising Star, Texas, Gaylon (Brenda) Fergason of Bossier City, Louisiana; three sisters Virginia (Jenny) Walton of Alva, Oklahoma, Wilma (Michael) Williams of Schalenburg, Texas, Ruby(Bob) Bouziden, of Alva Oklahoma. He is also survived by four nephews, Jammy Rimmer, of Oregon, Ben (Lana) Walton, of Slaton, Texas, Gaylon Jr. and John Fergason, of Bossier City, Louisiana; Six nieces, Roleta Bell, of Alva Oklahoma, Michelle (Clay) Graham, of Houston, Texas, Kristi (Anthony) Yim, of Houston, Texas, Rebecca (Roy) Numcio, of Waynoka, Oklahoma, Kyra Fergason of Bossier City, Louisiana, Chris (Rick) Robins, of Fort Worth, Texas; six great nieces, Amanda, Iris, Acacia, Riley, Reese and Heidi; six great nephews, Devon, Ashton, Cameron, Avvan, Hugh and Ivan; special friends, Charlene, Bridget and Caliye and many more cousins and friends.

Carlton Ralph Fergason, son of Oleta (Frazier) and Dave Fergason was born on October 16, 1951 in Hobbs, New Mexico; he was the third of six children. He passed away on February 1, 2019 at the age of 67 years, 3 months and 15 days. He graduated... View Obituary & Service Information

The family of Carlton Ralph Fergason created this Life Tributes page to make it easy to share your memories.

Send flowers to the Fergason family.