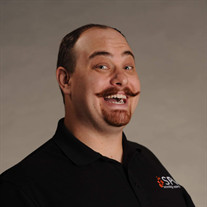 Bradley Allen Amerin (Brad) was born on November 30, 1989 in Liberal, Kansas to Cathy Cain and Jeffery Amerin. Brad went to Tyrone Elementary where he met the love of his life in 4th grade, Kylea Copeland. Brad was a very bright student and even was moved up a grade and graduated a year early from Tyrone High School in 2008. After graduating High School Brad chose to further his education at NWOSU in Alva, Oklahoma where he acquired a bachelors degree in mathematics and a minor in computer science. After graduating from college in 2012 Brad and Kylea decided to make Alva their home. Brad got a job at SPI here in Alva as the “Corporate Banana” as him and his colleagues like to joke. Brad was the go to man in the office. On April 5, 2014 Brad married the love of his life Kylea Copeland. Together they had 7 fur babies. Five dogs and two cats including their most recent addition to the family “Quack”. In his spare time he liked to play video games with his friends. His favorite was the Fallout franchise and even built his PC to resemble the game. Brad and his wife also spent time together playing the game “Borderlands”. Most of all Brads favorite place to be was anywhere with his loving wife. Brad was a very prominent figure in his family and friends lives. He could light up any room! The family would like to give a special thank you to Brads best friend Brandon Fletcher of Alva, Oklahoma. The family would like to thank you for being there to help take care of him and going out of your way to be there for Brad. The Family would also like to extend a big thank you to Chris and Angel Rauch of Alva, Oklahoma, and many other friends and members of this great community. Bradley Allen Amerin passed away on February 22, 2021 at the age of 31 years old in Alva, Oklahoma Brad is survived by his Wife, Kylea (Copeland) Amerin of Alva, Ok. Brother-in-law who was more like a son, Tanner Copeland of Alva, Ok. Mother, Cathy Cain and Husband Gene Cain of Tyrone Oklahoma. Father, Jeffery Amerin and wife Linday Amerin of Plains, Ks. Two sisters, Brianna Eaton of Norman, Oklahoma and Alexandria Eaton of Hays, Ks. Grandparents Alvin and Betty Gregg of Liberal, Ks. Aunt, Joyce Amerin of Liberal, Ks and many other aunts, uncles and cousins. Brad is preceded in death by his grandparents John and Shirletta Amerin of Plains, Ks. Memorial Contributions in Bradley Amerin’s Memory may be made out to Wharton Funeral Chapel through a Love fund.

Bradley Allen Amerin (Brad) was born on November 30, 1989 in Liberal, Kansas to Cathy Cain and Jeffery Amerin. Brad went to Tyrone Elementary where he met the love of his life in 4th grade, Kylea Copeland. Brad was a very bright student and... View Obituary & Service Information

The family of Bradley (Brad) Allen Amerin created this Life Tributes page to make it easy to share your memories.

Send flowers to the Amerin family.