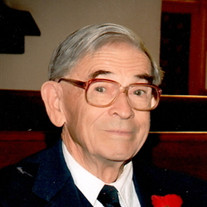 Robert Jesse (Bob) Reynolds, Jr. was born December 15,1920 to Dr. Robert J. Reynolds, Sr. and Helen Safford Reynolds in Potsdam, New York. He passed away at home in Alva on February 9, 2015. Bob grew up in Potsdam and graduated from Potsdam High School in 1938. A highlight of his life was a “road trip” across Canada with his younger brother, Edwin. Their car broke down in a small town in Saskatchewan. Edwin went on by train to his job on the west coast, while Bob stayed and worked with a farm family in Maple Creek until car parts arrived and he could return to Potsdam. This was where he developed his philosophy of “...It’s not WHO you know, but WHAT you are inside that matters.” In World War II, Bob served as a medic with the “Screaming Eagles,” 101st Airborne Division, 501 Paratrooper Infantry Regiment. He made twelve jumps in his military career, notably at Normandy, Bastogne, and in Holland. He received a Bronze Star, the Croix De Guerre, and the Belgian Foulangerie. After receiving an Honorable Discharge after the war, Bob returned to complete his BA degree in biology at Union College, Schenectady, NY. He had previous experience as an x-ray technician and in 1948 answered an ad for an x-ray tech. at the hospital in Mooreland, Oklahoma. There he met his first wife, Mina Lee Washmon, a Registered Nurse. They married in 1949 and moved back to Potsdam and Montreal, Canada for a short time. They returned to Weatherford, Oklahoma, where Bob graduated in 1953 from the School of Pharmacy at Southwestern State College. His first job as a pharmacist was at St. Mary’s Hospital, Enid, OK. In 1955, the family moved to Alva and Bob went to work at Schumacher Drug Store. From 1958 to 1967 he owned and operated Reynolds Pharmacy. The Pharmacy at Ideal Grocery Store was his next job for several years. He took a break from pharmacy work for a couple of years, working at the Helena School for Boys. He then worked as a substitute pharmacist in Cherokee, OK and Kiowa, Ks. until Jim Holder invited him to work at Holder Drug Store in 1981. Holder Drug evidently agreed with him as he stayed there for 32 years, retiring at the end of December, 2012 at the age of 92. Bob was a member of the Oklahoma Pharmaceutical Association which presented him with his 50 year pin in 2003. Bob and Mina were the proud parents of five children: Ann, Mary, Beth, Bob and Kathy. They provided a very loving home for their children, emphasizing education, faith, honesty, responsibility, respect, and love for one another as well as for others. Bob’s wife, Mina, passed away in 1991. In 1997, he married Henriella (Henri) Johnson, and gained a second family who loved him as their own. Henriella passed away in 2011. Bob was a member of the First Christian Church in Alva, He taught Sunday School for many years and served as an elder. For many years he enjoyed serving communion to members in rest homes or who were unable to attend church. He had a heart for service, both in his pharmacy work and church life. Many people said of Bob, “he was a true gentleman.” Yes, he was. He was preceded in death by his parents; a sister, Beth Brombach, a brother Edwin Reynolds; and both wives. Surviving are his children and their spouses, Ann and Dave Jester, Haysville, KS, Mary and Tom McDowell, Alva, Beth and Byron Black, Wylie, TX, Bob and Desiree Reynolds, Falls Church, VA, and Katherine Reynolds, Webster Groves, MO; his grandchildren, Mary and Elliott Loftis, Elizabeth and Stephen Davis, Robert and Jessica Black, Philip Black, Clara and Eva Reynolds, Duncan Kinzie, Josh Jester, Nick and Angel Jester; and eight great-grandchildren. He is also survived by Henri’s family, Karl and Emily Stottlemeyer, Karla and Larry Horn, Kellye Cobbs, and Becky and Brad Hart, their children and extended families. Bob is also survived by his Holder Drug family of pharmacists, employees and customers, and many other relatives and friend PDF Printable Version

The family of Bob Reynolds created this Life Tributes page to make it easy to share your memories.

Send flowers to the Reynolds family.