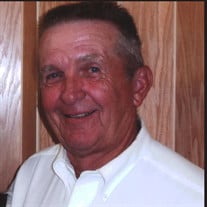 Billy Wilson (Bill) Billy Max, son of Gladys Dolores (Hurley) and Arthur Ernest Wilson was born on August 30, 1938 in Alva, Oklahoma. He passed away on August 5, 2021 in Enid, Oklahoma at the age of 82. He was a student at Alva High School and prided himself on his “pool playing abilities”. During high school, he worked as a ticker taker at the Rialto Movie Theater where he also met his first wife, Barbara, a popcorn girl. In 1955, Bill joined the Army and left for Korea specializing in tele-typing and communications. After a year, he came back and married Barbara, his high school sweetheart, on December 7, 1956. They travelled the world throughout his Army career while serving his country through a number of different posts, both overseas and stateside. His posts include San Francisco, Paris, France, Asmara, Ethiopia, Colorado Springs and Heidelberg, Germany to name a few. He served in the Vietnam War twice and had his final assignment at Camp Bullis, in San Antonio, Texas. In 1975, Bill retired from the US Army after a 20-year career. While in San Antonio, Barbara was treated for cancer and passed away on October 7, 1974, leaving behind Bill and their 5 children. They were married for 17 short but happy years. After the Army, Bill returned home to Alva, OK where he held a variety of different jobs including Alva Civil Defense Director, Ambulance Supervisor and various other positions. This is when he met Mary Kay, his last wife of 26 years whom also preceded him in death. In addition to Barbara and Mary Kay, Bill was preceded in death by his parents, granddaughter, Jessie and son-in-law, Matt Lyons. He is survived by his only sibling, Don Wilson of Oklahoma City and his 5 children: Patricia Gay of Virginia Beach, VA, Russell Wilson of Enid, OK, Suzy Lyons of Woodward, OK, Daniel Wilson of Japan and Thomas Wilson of Frisco, TX. In addition, he leaves behind 13 grandchildren and 18 great grandchildren, along with many other relatives and friends. The family asks that in lieu of flowers, donations can be made to either the American Cancer Society or the National Kidney Foundation. A graveside service will be held at the Alva Municipal Cemetery pavilion on August 23, 2021 at 10:00am. Reception will follow.

Billy Wilson (Bill) Billy Max, son of Gladys Dolores (Hurley) and Arthur Ernest Wilson was born on August 30, 1938 in Alva, Oklahoma. He passed away on August 5, 2021 in Enid, Oklahoma at the age of 82. He was a student at Alva High School... View Obituary & Service Information

The family of Billy Max Wilson created this Life Tributes page to make it easy to share your memories.