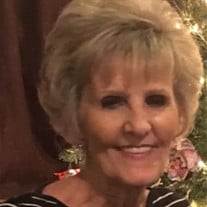 Betty Lea, daughter of Mary Ellen (Richardson) and James Cecil Mariott was born October 23, 1949 in Oklahoma City, Oklahoma. She passed away November 24, 2018 in Enid, Oklahoma at the age of 69 years, 1 month and 1 day. Betty attended Hopeton School and graduated from Alva High School. Following High School she graduated from the Beauty Academy. On August 25, 1971 she was united in marriage to Randy Rosco Rhodes at the Church of Christ in Alva, Oklahoma. To their marriage they had three children, Ronnie, Ricky and Brenda. Betty worked as a beautician in Dacoma. Later she worked at the Alva Bakery. She then worked at Wal Mart in Customer Service for 31 years where she retired. She was a faithful member of the Church of Christ. Betty was a fun-loving individual who loved crafting, quilting, rock hunting adventures and the outdoors. She was preceded in death by her parents; granddaughter, Chesney Starks; sister, Margaret Mosqueda; brother, Robert Farren; and a nephew, Michael Mosqueda. Betty is survived by her loving husband of 47 years; her two sons, Ronnie and Ricky and his wife Cassie; her daughter and her husband, Brenda and Damien Starks; four grandchildren, Kambri and Ryker Rhodes, Chandler and Channing Starks. Also surviving are four sisters, Donna Rhodes, of Alva, Dorothy Clymer, of Oklahoma City, Teresa Hammond, of Canton, and Rena Waddell, of Fairview; a brother, Lawrence Farren, of Cresson, Texas; many nieces, nephews, other relatives and friends. Memorial contributions may be made in her memory to the American Heart Association of Oklahoma.

The family of Betty Lea Rhodes created this Life Tributes page to make it easy to share your memories.