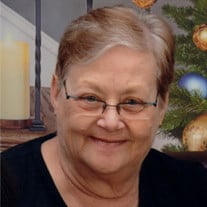 Family Visitation: Funeral Chapel on Sunday, October 25, 2015 at 5:00 P.M. to 7:00 P.M. Services: Wharton Funeral Chapel on Monday, October 26, 2015 at 1:00 P.M. Interment: Private Graveside Services at Alva Municipal Cemetery Barbara Ann was born to Hollis and Betty Goodrich on April 23, 1943 at Oklahoma City, Oklahoma. She passed away October 22, 2015 at Integris Bass Health Center in Enid, OK. at the age of 72 years, 5 months and 29 days. Shortly after graduating from Alva Senior High in 1961, Barbara attended Paul Barns School of Hair Design in Oklahoma City, Oklahoma, where she earned her State Beauty License. Barbara then returned to Alva and opened her own salon, “The Stylette”. Until her retirement in 2007, spanning a career of over 40 years, she served her ladies faithfully, many of them becoming lifelong friends. On December 19, 1962 she was united in marriage to Gerald William “Bill” Lamkin in Alva, Oklahoma, where they settled and raised their two children, Hollis and Faren. Bill passed away March 26, 2011. Mrs. Lamkin is preceded in death by her husband Bill, both parents and her youngest brother, Ron Goodrich. She is survived by one son, Hollis and his wife Laura of Alva, one daughter Faren and her husband Steve Litson of Enid, Oklahoma, four grandsons: Michael, T.J., Paden and Zane (“Bob”) three granddaughters; Kimberly, Shelby, and Kaylin (“KK”); a brother and and his wife Chet and Yvette Goodrich; and four sisters-in-law Rita Goodrich, Margerie Lamkin Hansard, Lorinda Lamkin Shelite, and Elaine Lamkin Roach:, two brothers-in-law: Tommy Lamkin and Johnny Lamkin; a number of nieces, nephews, other relatives and friends. Contributions may be made to Wharton Funeral Chapel for a Love Fund in Barbara’s name.

The family of Barbara Ann Lamkin created this Life Tributes page to make it easy to share your memories.

Send flowers to the Lamkin family.