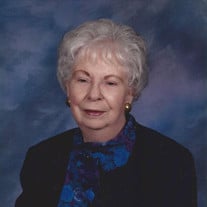 Barbara Ann was born on January 8, 1935, to Nellie May (Sharp) and Merle Henry French in Freedom, Oklahoma. She passed away on January 5, 2021, in Amarillo, Texas, at the age of 85 years, 11 months and 28 days. Barbara was the third child out of five, having an older sister and brother and a younger brother and sister. They lived on a farm 5 ½ miles north of Freedom. Their Grandfather, C. L. French, gave their dad, Merle, some land and he rented some. They raised wheat, oats and cattle. They raised most of their food. They canned vegetables and fruit. They attended the First Christian Church in Freedom, where Barbara was saved at 12 years old. By this time, their mom wasn’t doing well so they bought a house and moved to Freedom. During the summer of 1951, Barbara met Bob Fritzemeyer. He was working at the Santa Fe Railroad Depot in Freedom for the summer and she was working in the cafe. They started dating and by August they were engaged. On December 23, 1951, they got married. Bob was drafted into the Army the following June 1952. He was stationed at Camp Chaffee, Arkansas, Fort Benning, Georgia, and Fort Bragg, North Carolina. After Bob was discharged from the Army, he went back to work on the railroad. On October 13, 1957, after six years of marriage, their daughter Suzanne Gail Fritzemeyer, was born. Barbara was a stay-at-home mom until Suzanne’s sophomore year in high school. Barbara took care of a friend’s one-year old daughter and sewed for Suzanne. She later worked in two different dress shops. From 1982 to 1990, Barbara worked at Skellytown Elementary School as a teacher’s aid for special education kids. She loved the kids and the kids loved her. Barbara and Bob moved to Amarillo, Texas, in 1990 because of Bob’s job. They joined Coulter Road Baptist Church in 1991. Barbara and Bob were active in church work throughout the years. As a member of Freedom Christian Church, Barbara helped with Bible school and was church secretary. In Skellytown, Barbara and Bob were youth leaders and Barbara helped with the youth choir. Barbara was outreach leader for her Sunday School class and later taught a young adult class. At Higgins, Barbara and Bob were youth leaders. At Coulter Road Baptist Church, Barbara was a group leader and prayer chain leader. Barbara enjoyed cooking, baking, cake decorating, and sewing. Barbara and Bob had a garden and Barbara canned and froze vegetables and fruit from their garden. But most of all, Barbara enjoyed planting “spiritual” seeds and growing the lives of family members with encouragement and love. Barbara is preceded in death by her parents, her husband Bob, two sisters, Loana Darr and Melba Artz, and two brothers, Leslie and Bob French. Barbara is survived by her daughter, Suzanne and husband, Travis Block of Amarillo, Tx., two grandsons, Jacob Travis Block, Jr and wife Joanna and Joshua Lloyd Block. She is also survived by a number of nieces, nephews and other relatives and friends. Memorial contributions may be made to the Freedom First Christian Church Please Send Flowers to Wharton Funeral Chapel only, not to the Family Home.

Barbara Ann was born on January 8, 1935, to Nellie May (Sharp) and Merle Henry French in Freedom, Oklahoma. She passed away on January 5, 2021, in Amarillo, Texas, at the age of 85 years, 11 months and 28 days. Barbara was the third child out... View Obituary & Service Information

The family of Barbara Ann Fritzemeyer created this Life Tributes page to make it easy to share your memories.

Send flowers to the Fritzemeyer family.