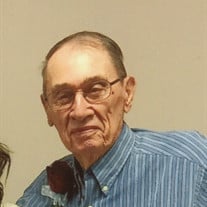 Arthur Lancaster Jr. was born April 21, 1922 to Arthur and Hattie Lucille (Stickler) Lancaster on a farm west of Hopeton, Oklahoma. He passed away August 6, 2018, living 96 years, 3 months and 17 days. Growing up Arthur attended Friendship Rural School through the 8th grade. As a young boy he helped his father with farming and raising cattle. He earned twenty-five cents and a homemade bread, butter and jelly sandwich. He attended Horace Mann High School in Alva and graduated in 1940. After High School he attended Northwestern Oklahoma State University. He was drafted by the United States Army and reported for duty in January 1942. Arthur completed his basic training at Mineral Wells, Texas and was immediately sent to the west coast. He was a member of Company A of the 37th division�s 129th infantry regiment of Ohio, serving as Staff Sergeant. He then sailed from San Francisco to the Islands of South Pacific and served thirty one months in the Solomon Islands and the Philippines. His division was heavily involved in the invasion of Luzon and ultimately the liberation of Manila from the Japanese. While his division was preparing for the invasion of Japan President Truman ordered the bombing of Japan that ended World War II. Art was honorably discharged at Ft. Leavenworth, Kansas in 1946. After returning home he was married to Marcile Haltom, whom he was married to for 70 years this past June. The couple was married at the Pilgrim Holiness Church in Hopeton, Oklahoma. After the wedding the couple moved to the Lancaster grandparents homestead west of Hopeton. Art and Marcile had two sons, Lelan Ray and Lynn Arthur. In the summer of 1957 they moved to Kiowa, Kansas. Each summer they moved back to the farm west of Hopeton to help with the farming. He also worked as a surveyor for the government. Then in 1971 they built a home in Alva and have resided there since. He continued his farming and cattle operation until his death. Art was a member of the First Christian Church of Alva, Oklahoma. He was also a member of the American Legion Post 234 of El Reno, Oklahoma. Arthur Jr. was preceded in death by his parents, Arthur and Lucille Lancaster, Brother, Orin Lancaster and many other family members. Arthur is survived by his loving wife, Marcile; his sons, Lelan and his wife Teresa of Dodge City, Kansas, and Lynn Lancaster of San Diego, California; two grandchildren Lisa Farris, her husband Brice, of Lawrence, Kansas and Jeff Lancaster, his wife Kelli of Dacoma, Oklahoma and four great grandchildren, Louie and Devin Farris and Jentrey and Lauren Lancaster. Memorial Contributions may be made in his memory to The First Christian Church.

The family of Arthur Lancaster, Jr. created this Life Tributes page to make it easy to share your memories.

Send flowers to the Lancaster family.