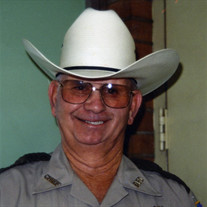 Arlo Dale Darr was born January 23, 1930 and went to his heavenly home April 27, 2016. Arlo was the first born of ten children to Otis and Retha Darr During Arlo’s “growing up” years, he attended several different schools. In the first grade he attended Freedom, the second grade at Selman. (His dad worked for J.O. Selman). When the family moved to the Haines Ranch, southeast of Waynoka, they found that there were no buses running to the outlying area, so the children returned to Freedom and stayed with their Darr grandparents. At this time, Arlo was in the third and fourth grade. He attended his fifth and sixth grade years at Red Hill School. When Red Hill School closed Arlo finished the seventh, eighth, and ninth grades at Farry. Arlo was very proud that in his adult years he received his G.E.D. In July of 1952, he went to work for Simpson Walker, Sr. Here, he began to feel some stability in his future, so on August 9, 1952 he married his girl-friend, Verlene Stewart. The couple spent 17 years on the Walker Ranch, where Arlo was foreman. In 1969, Sheriff Clyde Vore went to the ranch and offered Arlo a job as Deputy Sheriff of Woods County. Arlo accepted, and the family moved to Alva. Later, when Vore retired, Arlo was elected Sheriff. Just before his term of Sheriff ended, he and police officers Bob Keltch, Mike Dooley, and Trooper John Eddings received an order to take a suspect into protective custody. During the encounter, Arlo was badly wounded, and was taken to the hospital where Dr. Hinkle and Dr. Simon performed surgery. He was later transferred to Enid. In 1975, Arlo was elected Marshal and Chief of Police for the City of Alva. He served as Chief of Police from 1975 until he retired in 2007. In 1996, Arlo was elected “Citizen of the Year”, in 1998, “Law Enforcement Officer of the Year”, in 2003 “Honored Old Cowhand” and in 2015 was presented “Lifetime Recognition as Parade Chairman”. Arlo is a member of Town and Country Christian Church. He served on the Citizens Advisory Board of the Bill Johnson Correctional Center. Arlo was arena flagman for the Freedom Rodeo for 37 years. Until recently, whenever there was a funeral in Freedom, Arlo faithfully drove to Camp Houston and directed traffic on Highway 64, so that the funeral procession could cross the highway without a problem. Arlo is preceded in death by his parents, brothers Neil, Bill, Jr, sisters and their spouses Joyce Riley, Laveta Parker, Juanita & Jack Beer, Co & Gene Province. He is survived by his wife Verlene, son Shawn and his wife Paula of Alva, daughter Shelley Wyckoff and her husband David of Edmond, and a very special friend who has been like a daughter to him for 37 years Tanya Phillips of Alva. Grandchildren Darra Wyckoff-Bingham of Edmond, Stephen and Lisa Darr, Chris Darr, Jeremy Darr, Sadie and J.C. Crusinbery all of Alva. Great grandsons Colton Bingham and Degan Darr. Brothers Lewie and Lana of Coldwater, KS and Jim Darr of Freedom. Many cousins, nieces, nephews and friends. Memorial donations may be made through Wharton Funeral Chapel, to the Freedom Fire and Ambulance Dept

The family of Arlo D Darr created this Life Tributes page to make it easy to share your memories.

Send flowers to the Darr family.