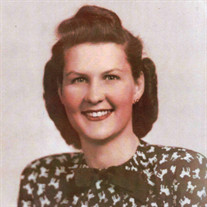 Funeral Services: Wharton Funeral Chapel, Monday, January 4, 2016, 2:00 P.M. Interment: Greenwich Cemetery, Stewartsville, NJ (at a later Date) Alice daughter of Almadine (Boone) and Ferdinand Werenne was born on January 22, 1919 in Newark, New Jersey. She passed away on January 1, 2016 lacking 21 days of her 97th birthday. At the age of two years old, her parents moved to Trenton, New Jersey where she grew up and graduated from Trenton High School with the class of 1937. And then attended Rider college where she studied bookkeeping. She was employed by Lilian Charm Dress Shop and the United Clay Mines as their secretary until she met and married Joseph Bemelmans in 1948. They were married on February 17, 1951 to their marriage two children were born Jean-Pierre and Mary Elizabeth. In 1970 they start their business Belco Instrument Company, where they worked together for over 30 years. Alice enjoyed sewing and was an excellent seamstress. She enjoyed yoga for more than 45 years which contributed to her excellent health. She was preceded in death by her parents and her husband Joseph (August of 2014) of 63 years. Alice is survived by her son Jean-Pierre Bemelmans and his wife Frances of Easton Pennsylvania, and grandsons, Michael and his wife Kelly Bemelmans of Quakertown, Pennsylvania and Christopher Bemelmans of Bethlehem Pennsylvania. A daughter Mary Lieurance and her husband Chad of Alva Oklahoma, and grandsons, Ian and his wife Kara Kirkham, Simon Kirkham and girlfriend Julie Isenbart, Tylor Coghill and Cody Lieurance all of Alva Oklahoma. A number of nieces, nephews and other relatives and friends. She will be laid to rest in Greenwich cemetery, Stewartville, New Jersey beside her husband Joseph at a later date.

The family of Alice Bemelmans created this Life Tributes page to make it easy to share your memories.

Send flowers to the Bemelmans family.