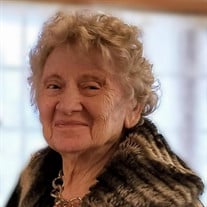 Alberta Romona., daughter of Arles Percy and Anna Ida (Salwaechter) Riggs was born on November 19, 1928 west of Carmen, Oklahoma near Green Valley. She passed away on the 10th of December at the age of 92 years, 21 days. She attended Green Valley Elementary and graduated from Dacoma High School. After raising her two sons, Alberta enrolled in college at Northwestern Oklahoma State University in 1970 to pursue her dream of becoming a teacher. She received her Bachelors in Elementary Education and continued on to earn a master’s degree in special education in 1975. She would later earn a second master’s degree in remedial reading. Alberta taught at Carmen-Dacoma public schools. Alberta was Teacher of the Year for Carmen-Dacoma and was a finalist for the state title in 1979. On March 5, 1948 at the Green Valley Free Methodist parsonage Alberta married Merritt Max Bliss. To their marriage two sons, Ronald Max and Lonnie Dean were born. Following their marriage they lived in Alva. In 1949 they moved to Enid where Max worked in the construction of grain elevators. In 1950 they moved to the farm located on the land where her grandparents had homesteaded in 1893. They farmed and raised cattle. Alberta worked baking pies for the sale barn on the week-ends. She was a teller at Hopeton State Bank for several years before leaving to teach. She was a loving wife, mother, grandmother and great-grandmother. She logged many miles following the ag, academic and athletic activities of her sons, grandchildren and great-grandchildren. She was a member of the Green Valley Free Methodist Church and the Woods County Minerals Owners Association. Mrs. Bliss was preceded in death by her husband, her parents, two sisters, Gillian Brannon and Billie Bell, three brothers, Bobby Riggs, Wallace (Bud) Riggs, and Arles (Junior) Riggs. Alberta is survived by two sons and their wives, Ronald and Nancy of Enid and Lonnie and Gail of Carnegie. Five grandchildren and 15 great-grandchildren; Travis Bronson and his wife Melissa and children Chelsea Tettleton, Kylee & Addison Bliss, Lucian and his wife Anne and children Logan, Luke, Chayah and Legend Bliss, Theron and his wife Olivia and children Breckyn, Jocelyn, and Evelyn Bliss, Natalie and her husband Jeff Crites and son Charley, Nicole and her husband Michael Deatherage and children Xavier Nesahkluah, Axl, Lexie and Phenyx Deatherage. A Max and Alberta Bliss Scholarship has been established at Northwestern Oklahoma State University. Donations may be made to NWOSU Foundation, Max and Alberta Bliss Scholarship, 709 Oklahoma Blvd., Alva, OK 73717 Funeral arrangements are under the direction of Wharton Funeral Home in Alva. A family service is planned.

Alberta Romona., daughter of Arles Percy and Anna Ida (Salwaechter) Riggs was born on November 19, 1928 west of Carmen, Oklahoma near Green Valley. She passed away on the 10th of December at the age of 92 years, 21 days. She attended... View Obituary & Service Information

The family of Alberta Romona Bliss created this Life Tributes page to make it easy to share your memories.

Send flowers to the Bliss family.